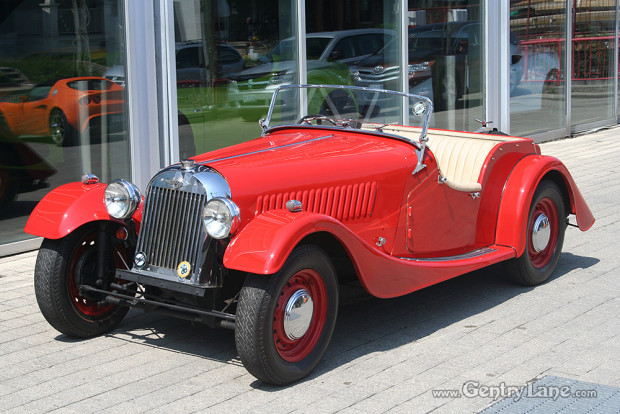 Looking for a throwback to the days where motoring really meant something? Wind in your face, side curtains up. A warm Harris Tweed scarf, some string-backed gloves, and you’re ready to go. If that sounds like what you’re looking for, this 1952 Morgan Plus 4 might be just the ticket. A 1952 “flat radiator” model, with a 1991 cc four-cylinder engine from a Triumph TR2 connected to a four speed manual transmission. While only producing 90 hp through twin SU carbs, this car weighs less than 850 kg and so still moves along quite well. It won’t set the road ablaze, but I recently drove a newer 4/4 with similar horsepower and two people in the car and found acceleration surprisingly brisk, on par with most modern sedans. The car is not equipped with power steering or brakes, but the narrow tires, light weight, and wide banjo-spoke steering wheel mean that you won’t likely feel a need to have them.

The Plus 4 is the larger chassis of the time. The plus referring to the longer wheelbase and increased power over the 4/4. This provides some well needed extra leg room, some extra width, and a larger amount of space behind the seat for luggage. As long as your luggage is a medium sized soft bag. Which is still an improvement over the map and pair of gloves a 4/4 will fit.

This is a gorgeous red car, with beige leather interior, plenty of beautifully finished wood (and yes, very important parts of the chassis are in fact made from ash) and a black hood. It is fitted with twin spare tires, which is indicative of the quality of tires in the 1950s, and somewhat of a novelty today. The car is right-hand drive, but the narrowness of the body and the excellent visibility (no a-pillar airbags to be found here) mean that driving in left hand drive traffic should not pose a challenge.

This car was built in the 1950s, but the basic design is from 1936. As such, the suspension is firm, with ride control bordering on crashy on poor roads, the ergonomics are of a different era, the handling as vintage as the body style. Despite this, the cars are great fun to drive. Quick steering, excellent visibility, very light weight, all combining for an engaging and fun experience. The smiles you’ll evoke from passersby are worth the price of admission by themselves.

Morgan made the Plus 4 from 1950 until 1969. It was largely unchanged, through this time. Major changes being a revised front cowl grille for 1953, as well as progressively larger and more powerful four cylinder engines. There were also four seat roadsters made as well as two and four seat coupés for a limited part of the production run. This early model is listed at $45,000 and is one of only two Morgans listed in Canada right now.