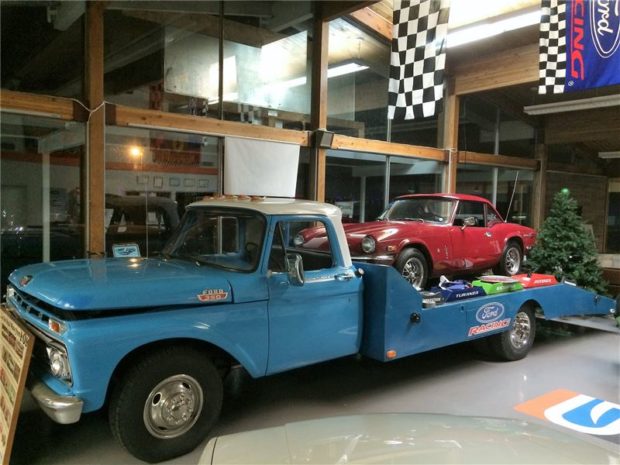 Every week, we here at autoTRADER.ca bring you some of the most interesting, unique, rare, cool, or just plain oddball cars we can find as part of our Find of the Week series. But this week, instead of just showing you some cool car for sale we’re giving you a way to help bring home those cars. That’s right, it’s a car hauler, more specifically a 1965 Ford F-350 with a car hauler bed. But this vintage hauler has a little bit more style than your average truck.

The Ford F-series of light trucks started way back in 1948, and for a little more history on that original model you can take a look at our Find of the Week on an F-68 Stepside from that year. By the time of this 1965 truck, the F-series was on generation four.

The fourth generation F-series got off to a rocky start. The generation was introduced in 1960 and was available with a fairly novel integrated cab and bed. There was no gap between the front of the bed and the back of the cab, the whole thing was once piece. That was much cheaper for Ford to produce, but it was dropped in 1963 because it wasn’t popular. There were even rumours that overloading the bed would bend the body enough to jam the doors shut. During the switchover, production issues meant that some of the 1963 and 1964 trucks actually had to use the old-style 1957-1960 beds.

For 1965 a big refresh was in order, at least underneath. The F-series got an all-new frame to sit under the same body. The new frame got Ford’s all-new Twin I-Beam front suspension. That was Ford’s first independent suspension on a truck and was a big step toward the acceptance of trucks-as-cars that we have now. 1965 was also the first year for the new 300 cubic inch (4.9L) straight-six engine and a 352 cubic inch (5.8L) V8.

Those introductions were all ideas that would stick around in Ford trucks. The frame was used in the F-series until 1979. The twin I-beam suspension is still used in E-series chassis cabs, and the 4.9L straight six could be found under the hoods of F-series trucks until 1996. The F-series became the best-selling truck in Canada that year, a title it hasn’t given up since.

Our find of the week is an F-350. That means it is a one-ton model, which would have come with a 4,445 kg gross vehicle weight rating. The heavy duty nature of the truck means that it didn’t get the new independent front suspension with coil springs. Instead, there is a solid front axle and beefy leaf springs. This is a work truck, so of course that’s what you want.

Because this truck was intended to haul big things on the back, it’s equipped with dual rear wheels. The engine is Ford’s 5.8L V8, which is an FE block. The FE series of engines was Ford’s mid-size block. The FE is the same engine design made famous as the massive 7.0L V8 that saw duty in the Shelby Cobra, helped Ford win Le Mans in the GT40, and was banned from NASCAR when equipped with overhead cams. In this application, the 5.8L V8 made 208 hp and 315 lb-ft. It’s equipped with a four-speed manual transmission that’s geared for moving loads over high-speed cruising.

Inside is a simple, vintage cab. There are just three gauges, with a prominent center speedometer. It’s simple, functional, and there’s nothing there you don’t need. The way a working vehicle should be.

The most important part of this truck is the dovetail bed on the back. It’s set up for moving cars around, not recovery, so there is no winch or tow gear. What there is is a nice big space to show off your car, with tie downs to hold that car in place. If you have an interesting car that you need to move around, then our autoTRADER.ca Find of the Week is one of the coolest ways to do it. And if you don’t like the car hauler look, the seller says that they’ll work with you to turn it into a flatbed stake truck instead.