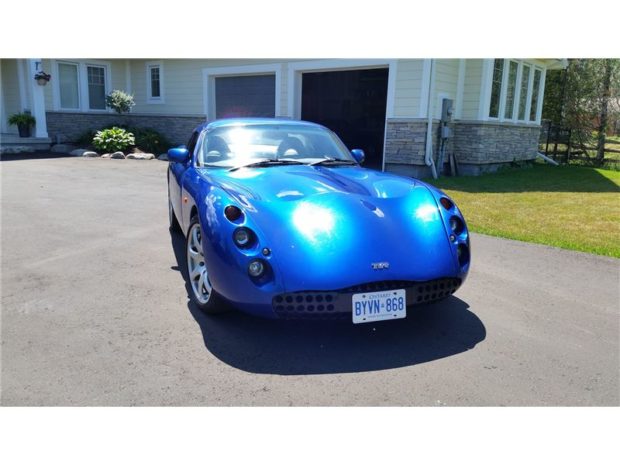 The story of TVR is the story of a company that has shown moments of brilliance with some gorgeous and incredibly fast cars, followed by poor management, bad luck, and hard times. The original TVR was founded in 1946 in Blackpool, England by Trevor Wilkinson. Initially, he started by doing general engineering projects, but in 1949 TVR Engineering (drop some letters from Trevor, and there you have it) built their first chassis using Morris Eight suspension components and the engine from a Ford van. The cars were billed as light-weight racers that could “out handle anything”. By the late ’50s, the carmaker was producing a handful of chassis and bodies per year, mostly exported to the US. This small volume, combined with poor leadership lead to their first reformation.

Under different management, the company increased production and developed the first Griffith. Named for the driver who designed it, it took their existing Grantura and added a 4.7L Ford V8. A dock strike in the US in 1964 lead to a sales stoppage and the company was liquidated in November of that year, only to have the assets purchased by a shareholder. Production re-started, revised Griffiths started winning races, and sales picked up.

The first Tuscan was introduced in 1967 with a Ford V8 and later a V6. They sold 173 of them by 1971 when the TVR M-series replaced it. These were the first of the more extreme TVR road cars, being called loud and fast, with excellent road holding. They were also cramped, with poorly operating HVAC systems. Nearly 2,500 were built over nine years.

By 1981, the company was again foundering, and ownership was transferred to Peter Wheeler (namesake Trevor Wilkinson had left the company in 1962). They began building cars with enhanced versions of the popular (Buick based) Rover V8. In the early ’90s they developed their own V8, and then an inline six based on that V8. Which isn’t the way you normally do a six from eight, but TVR was never a normal company.

While working on these, they started making more extreme performance cars. The new for 1991 Griffith weighed 1,048 kilos and had a 340 hp V8 in a very stylish body. The Chimaera had the same engine but was intended to be a GT car, so it was fitted with softer suspension but was the same lightweight sports car underneath. The Cerbera got the Speed Six and Speed Eight engines making up to 440 hp from a naturally aspirated 4.5L V8.

Finally, we arrive where this week’s history lesson ends. The new-for-1999 Tuscan. With stunning stacked headlights, scalloped doors, swooping roof, cheese grater lower grille, and massive hood extractor scoops. The model started with a 350 hp inline six, a weight of just 1,000 kg, and then grew in power from there. No anti-lock, no traction control, no stability control, and no airbags. Just you, the throttle, the brakes, and the massive grip controlled through the small-diameter steering wheel.

The Tuscan will accelerate to 160 km/h in 8.1-seconds, and can corner at nearly 1.0G. But it also gets AC, and even with the targa roof stowed the trunk has enough space for a little bit of luggage. Best use soft bags though.

Inside are functional and pleasing features. The exposed aluminium curve of the top of the dash is actually a structural brace. The pedal box is on display instead of carpeted, but that makes it easier to move the pedals to fit you. The instrument panel is made from brass, which isn’t more functional but it definitely leaves an impression.

While many of the older TVRs were sold in North America, the manufacturer fell behind on our increasingly tough safety and emissions laws. That means that the later cars like the Tuscan were never imported to Canada. Well, the first Tuscans have recently crossed our 15-year import mark, and we’ve found one that’s been brought over. Our autoTRADER.ca find of the week is this stunning 2001 TVR Tuscan.

The body is painted in a vibrant blue you might recognize from the Viper GTS. Inside, the seats are grey leather with darker grey carpet. The interior has been recently replaced, and the colour combination showcases the brass gauges and knobs. Under the long, clamshell hood is a recently rebuilt TVR 4.0L “Red Rose” inline six producing 380 hp and 310 lb-ft of torque. The suspension features adjustable shocks by Nitron, a UK company with extensive motorsports experience. The car is currently registered in Ontario, so all of the importation work has already been dealt with.

As the ad says, this is not a car for “the faint of heart, or for those not prepared to be stopped in the street and photographed.” But it is just the ticket for someone who wants a brash, powerful, visceral driver’s car with the looks to match the drive.