The Hyundai Veloster is a strange car that, much like the young drivers it is aimed at, seems to have trouble deciding exactly what it wants to be. It’s a coupe, but it has a hatch. It’s a two door, except that one side has an extra door. It’s supposed to be sporty, but it doesn’t deliver sporty handling or performance. It’s an economy car, but my test car stickers for $28,699

So what is the Veloster? It’s a car for someone who wants the looks of a coupe, the rear seat versatility of a sedan, and the cargo space of a hatchback. Someone who wants big wheels, a bold centre exit exhaust, and sporty looks, but not the sharper handling of a similarly priced Toyota 86, Subaru BRZ, or even its own stablemate Genesis coupe.

Enough about what it is or what it wants to be, how does it do as a car? Well, in that respect it does a great job of showing how far Hyundai has come in just one generation. I recently drove the new Elantra sedan and the difference between this Veloster turbo and the new Elantra are startling. The Veloster was introduced for 2011 and is starting to show that age. The interior, not a Hyundai strong suit when it was new, now gives up a great deal to the newly redesigned Civic coupe, Golf hatchback, or its brother the Elantra. The materials are hard, and while they are put together well, they look low budget. Something that is quickly becoming unacceptable in a low budget car. 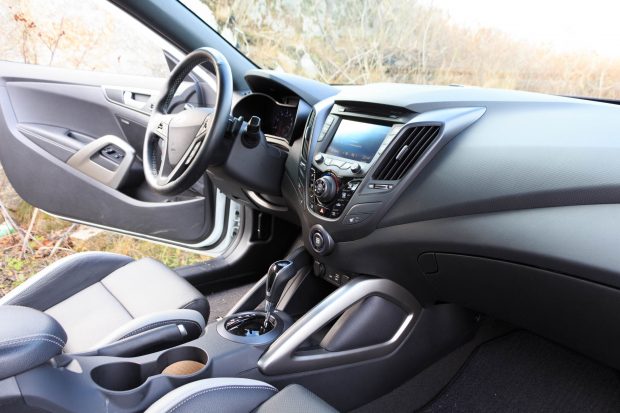 The Turbo Veloster comes with a seven-speed dual clutch transmission. The dual-clutch transmission is taking over the performance market right now and is even replacing the manual gearbox in Ferraris. Porsche uses them, Lamborghini uses them, and pretty much every new serious performance car comes with a DCT. The advantage is that they can shift more quickly than the best driver in a manual while delivering better performance and economy than a conventional automatic. Unfortunately, the Veloster’s DCT is slow. Downshifts, even with the paddles, are sluggish. Upshifts can take several seconds. Especially when moving from a low gear to a high one. A 3-7 shift can take four or five seconds, during which time the car is not able to accelerate. On top of that, the dual clutch box slips the clutches quite a bit from a stop, making for a sluggish and somewhat jerky takeoff from intersections.

Despite the gearbox, the engine is a bright point for the Veloster Turbo. It pulls well, even from low RPM, there is the surge toward redline that is typical of turbocharged engines, and it makes the noises that a good turbo should make. It’s not fast, but it is adequate, and there is enough torque that pulling away with any vigor will lead to squealing tires. The exhaust noise is a little bit intrusive, but for the target of this car, that’s probably a feature, not a problem. The 1.6L turbocharged four-cylinder makes 201 hp with a broad torque band. With the seven-speed dual-clutch box I averaged 8.5 L/100 km. That falls within the estimated 8.9/7.1 rating but is still a disappointment compared with the best in class. Especially since most of my driving was in suburban and rural areas with little traffic. 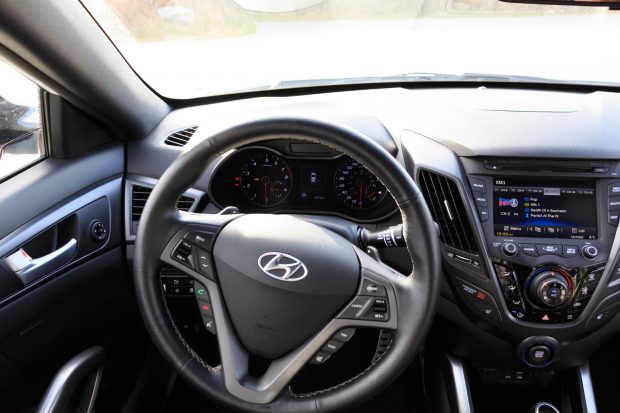 The interior, while looking its age, is well laid out. The heated steering wheel is a plus, and unusual in this class. The navigation works well, and is responsive, as is the infotainment system. There is no Apple Carplay or Android Auto, but the connectivity works well via USB and Bluetooth. The large sunroof doesn’t buffet at speed when it’s open, and the heavily bolstered leather seats are comfortable and supportive. The big, two-tone, embroidered bolsters don’t let you forget that you’ve picked the turbo model either.

Rear seat room is tight for a full-size adult, and an impossible fit for me, but with the extra rear door, getting back there is easy. A rear-facing car seat would be a tight fit, but getting it back there wouldn’t be the impossibility it would be in a coupe. Cargo space is good despite the heavily sloping roofline, and the rear seats fold down most of the way, but not completely flat. Something to watch out for, especially here in rainy Halifax, is that when you open the hatch, the water on there likes to run down and onto the rear seat area. That experience is not fun for anybody sitting back there. 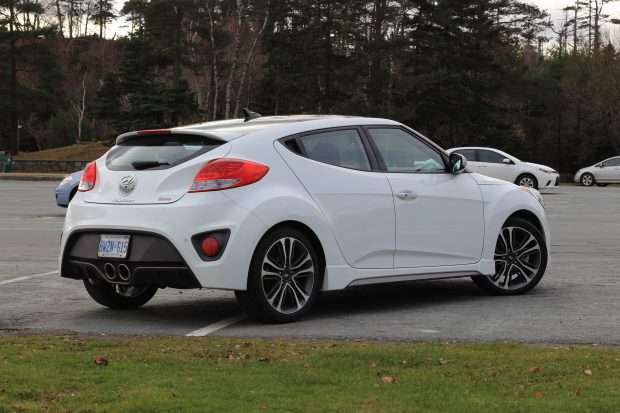 The suspension in this car is tuned stiffly. It implies performance, but the damping doesn’t follow through on that. The stiffness makes it bouncy over bumps, and it can be twitchy on the highway. The lack of feel or communication from the steering doesn’t help, and I found myself constantly making back and forth corrections to stay in my lane. It was quickly tiring with any stretch of highway driving. Combined with the noisy and stiff 18-inch wheel and tire pairing and this isn’t a car you’re going to want to spend a whole day in. The steering has three variable assistance modes, but any difference between sport, normal, and comfort was nearly impossible to notice. 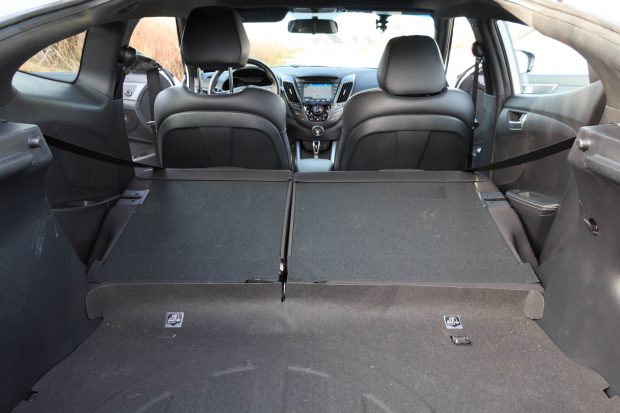 The 2016 Veloster does a great job of showcasing how far Hyundai advances with every generation. Parked next to the 2017 Elantra, interior of this car, and the suspension tuning, seem almost prehistoric. I hope that there is a new generation Veloster, because if it is as good as the new Elantra, Hyundai should have a real hit. As it sits, though, the Veloster is one of those cars where if you like the look of it, you’ll probably like everything else. If you like the styling, you’ll appreciate the usability of the extra-door layout. If you don’t like the styling, you won’t care. The owners I talked to liked the stiff ride, saying that it felt sporty. The same with the gearbox because it had paddles. Primarily, though, they loved the unique, aggressive styling. If you like that styling, then the Veloster is worth a look. If you don’t like the shape, then you won’t care about the rest and the Veloster Turbo is not for you.