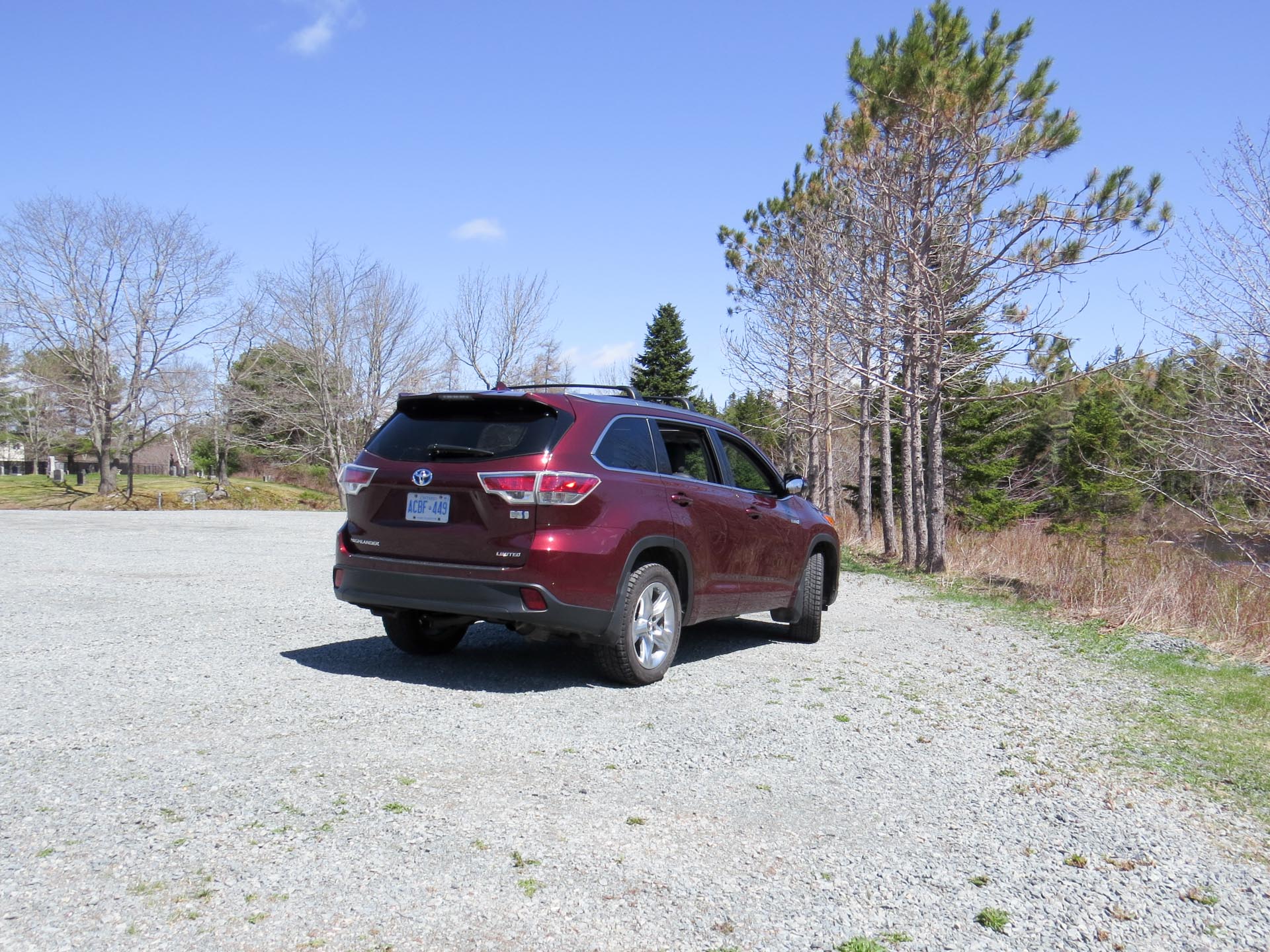 There is a coffee shop, about a 10-minute drive from my home, where I like to work whenever I can. It’s a neat little place, built inside an old train station. There are lots of little booths, it’s quiet, the WiFi is good, and most importantly, coffee refills are cheap. It was my second day with the Highlander and I was already resigned to what I was sure would be a boring week ending with a review full of soccer mom and dad-mobile jokes. A short drive to the bus stop that morning had already revealed numb steering, and a CVT that was slow to react. Made more irritating by the power/Eco dial which swung madly in the place where a tachometer should be, along with slow throttle response from the “Eco” mode. But I wanted to go work at the coffee shop, so I took the Highlander.

The road to the shop is a good way to quickly figure out a car. There are some windy parts, a few good hills, some smooth pavement, and some bumps that will shake your fillings out. There is also a very sharp turn. It is signed for 15 mph on a 50mph road, and it starts with a downhill left, then levels out, cuts very sharply right, and heads steeply back uphill. Lesser cars will roll over and play dead. As soon as the road starts back uphill, you can feel the outside front tire give up and roll over, spoiling the fun. But the Highlander doesn’t do that. I barely even braked for the corner. Ok, I think, that had to have been a fluke. It’s fine, the corner is just as bad on the way back, so I’ll throw it in harder next time. A couple of minutes later I’m about to signal for the coffee shop parking lot, but I’m still thinking about that turn. If I keep going, the road I’m on spends the next 30 minutes winding along the coast. It’s a beautiful road, but I know I should probably get some work done. Screw it. I actually said that out loud. I kept going. The road got twisty but the Highlander just kept going. I pushed harder, not slowing down for the big yellow speed signs, and the Highlander kept going. I started to grin. I was actually having fun hurling a 5000lb SUV into corners. An SUV based on a Camry, no less. But I didn’t care. I opened the massive sunroof, cranked the JBL 12 speaker stereo and let the music blast. However fast I was going the Highlander just wouldn’t roll over. The snow tires wouldn’t squeal, and as soon as you were back on the gas it would rotate if it needed to and pull you hard out of the corner. 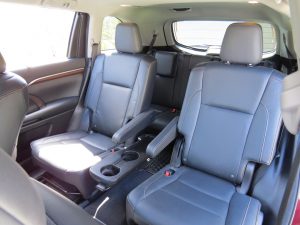 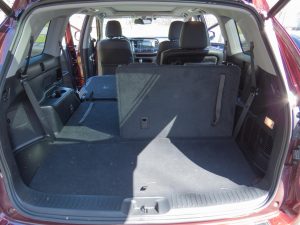 I drive a lot. I average somewhere near 50k miles per year, most of it a horrible highway slog, back and forth from home to my old office. When you do that many miles, you lose a lot of the enjoyment of driving. Sure the occasional autocross or lapping day helps with that, but street driving is boring after a certain point. Most of the time it’s just getting me where I need to go. But in the Highlander, that day, I just kept driving. There is a traffic circle where I had planned on turning around, but I ended up doing a full lap of the circle and kept heading down the coast. I catch up with a slow car and wait for a dotted line so I can pass. They’re few and far between on this road, and when you find one it’s usually short. People around here love to accelerate when they get to them to stop your pass. So when I see the first one my right foot goes down. The CVT takes a moment to respond but the electric motors don’t. I’m suddenly moving around the slow car in a rush of torque. I’m still not a fan of the CVT in general, but the best help it can get is two big electric motors putting out up to 350 lb-ft. The smooth V6 helps, sounding great when you hear it but lurking quietly when you don’t. It doesn’t drone, and the acceleration is quick enough that the CVT doesn’t need to linger at high revs for long. I end up getting to the coffee shop more than an hour late. 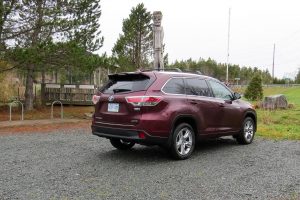 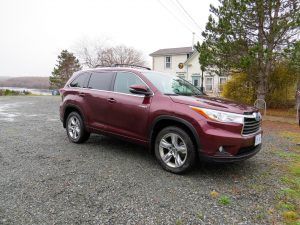 On the short trip home I play around with some more of the features. First I try out the EV mode button that locks it into electric drive. But it only works up to 25 mph, so forget that. I mash the gas, and the Highlander pulls away strongly. The steering wheel squirms in my hands. Left and then right, pulling strongly the whole time. I haven’t felt that much torque steer in a long time. The Hybrid all-wheel drive doesn’t have a center drive shaft, so all the power from the engine and the larger of the two electric motors goes through the front wheels. That’s what’s jerking the wheel from my hands. The rotation and pull out of corners? There’s torque vectoring built into the system, so the SUV is using the rear motor to help me corner faster. I like when a hybrid improves the driving experience. Which may be the first time anyone has ever said that.

The next weekend I have a 700-mile round trip to go visit my parents. Normally I would take my own car. Because even though the Highlander has been showing me 29 mpg, my own car gets over 40, and gas is expensive. But the mountain passes on the way are long and that power is nice. And these heated and ventilated seats are some of the most comfortable I’ve sat in in a while. And my wife and I are taking one whole carry-on sized suitcase, so we could use the cargo space. Fine, let’s take the Highlander. It was one of the least memorable times I’ve done that drive, and that’s a very good thing. The Highlander was planted, smooth and quiet on the highway, making a 5-hour drive feel… not like nothing at all, but definitely more pleasant. If you get bored of the nav screen, you can watch the power routing. Watching the electricity and horsepower flow around to the different systems is entertaining for a while. As is feathering the gas pedal trying to light up the “EV” light, which tells you that you’re not using any gasoline at all. At least for the time being. 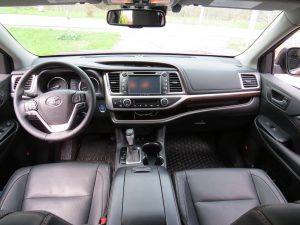 Now a lot of that makes it sound like I’m in love with the Highlander, but I’m not. For starters, in Limited trim at least, it basically only seats four. Lower trims have a middle bench, so might comfortably seat five. The back seat is tiny, and even with the middle row slid forward there isn’t much room back there. My shoe would fit sideways in the footwell, but not with my foot in it. The radar cruise control is great on a back road, but the following distance is hard to judge and seemingly random. I never did get the hang of when I needed to move to the left lane to pass smoothly on the highway. Worse yet, I had to open the rather thick manual to figure out how to turn it to “normal” mode and the radar defaults back on every time you turn on the cruise control. Once I got onto a 70 mph limit highway, the near 30 mpg turned into near 25 mpg in a hurry as well. Plus as much as I loved the handling, it’s still a very large vehicle, and while it will corner hard you can’t really toss it around. If you do manage to throw it in too hard, the understeer can’t be cured if you can’t get back on the throttle. It’s a lot of fun, but don’t forget about physics.

The Limited Platinum trim Highlander Hybrid I had is $50,048 (mine was Canadian, so actually stickered at $55,160 Canadian), and at that price it’s a bit of a hard sell. I love the way it drives, the fuel economy is good for something this size, but with only four real seats why wouldn’t I get a Lexus RX instead? The RX hybrid is only $2,000 more and is better equipped. Assuming you can get around the looks. The Lexus gives you that badge and the Lexus service reputation. Or even a Volvo XC90 for less? The Volvo is so much more stylish, and really it’s nicer. Up North, the approximately $5,500 Hybrid option is available on all trims, and that seems to make more sense. A $44,000 XLE trim Hybrid would be much more competitive, and if you really want the gadgets, the RX is always there.